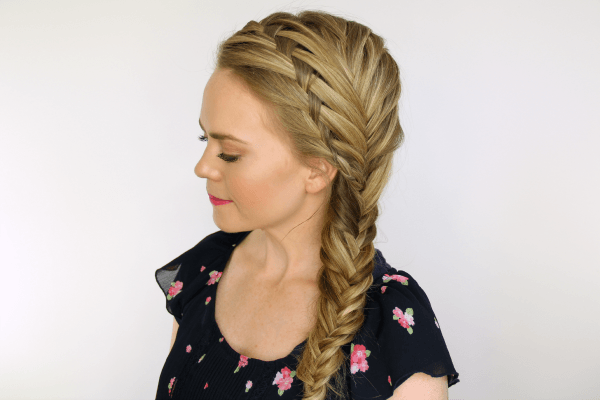 Waterfall and Fishtail French Braids is a twist on Braid 20 – Double Headband Waterfall Braids and something I’ve been wanting to try for a long time.

I often psyche myself out on certain hairstyle thinking they are too difficult to do and immediately forgetting about them. I thought this one would be the case and tried it a few times with a dutch braided waterfall first before finally convincing myself it had to be a french braided waterfall. Suddenly it was easy peasy. I love the seamless look of both braids and will continue working on a Dutch braided version because we all know how much I loooooove the dutch braids.

Follow theses steps or jump down to the video tutorial:

Step 1 / Start by brushing the hair and parting it on the right side.

Step 2 / Next, separate out a portion of hair from the forehead to about 2″ back and down to the left ear.

Step 3 / Tie off the back portion.

Step 4 / Next, take a section of hair right at the part and divide it into three sections.

Step 5 / Cross the back strand over the middle.

Step 6 / Now cross the front strand over the middle.

Step 7 / Then drop the back piece over the other side of the head and pull in a strand below it in its place.

Step 8 / Next, cross the right strand over the middle and bring in a section of hair.

Step 9 / Repeat steps 7 and 8 until reaching the end of the hair.

Step 10 / Tie off the braid with an elastic band.

Step 11 / Let out the back hair that was tied off previously.

Step 12 / Create another section of hair by drawing a line from the back of the crown down to the nape of the neck.

Step 14 / Now create a fishtail french braid pulling in the waterfall pieces on the front side.

Step 15 / Once the braid reaches the neck, let out the tied off portion and begin adding it into the braid.

Step 16 / Finish the braid by creating a regular fishtail braid over the left shoulder. 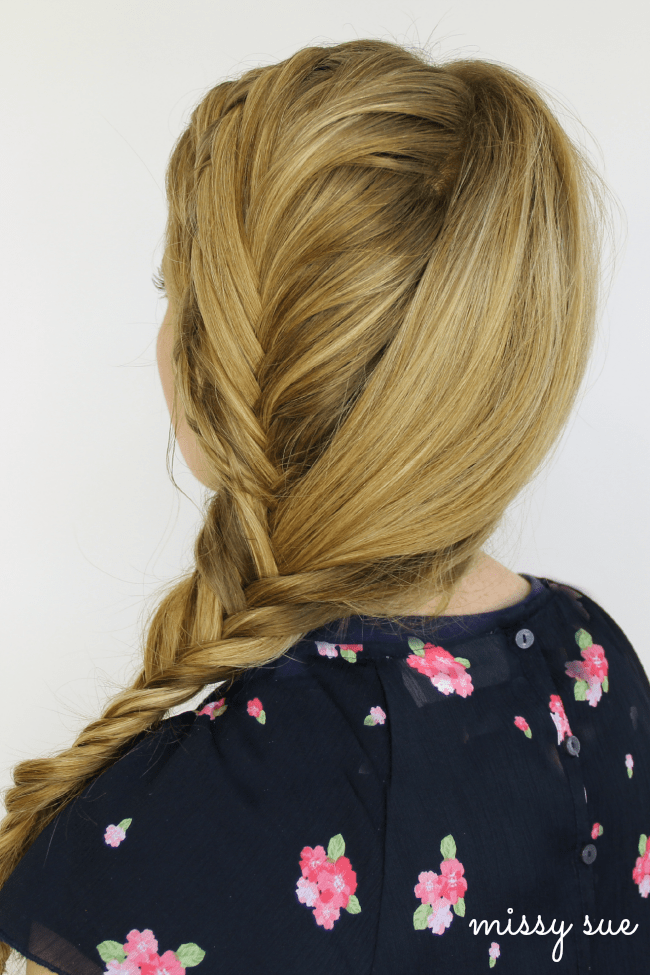